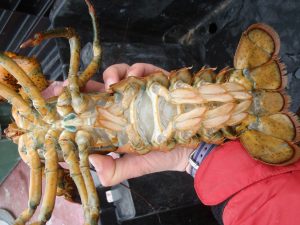 In early Spring 2013, AMIK was approached by the community of Uashat mak Mani-Utenam to establish a research protocol on the American lobster.

In collaboration with the Institut Maurice-Lamontagne, AMIK was able to meet its goal by creating the protocol and gathering data on American lobsters. The principal objective of the project was to perform a biomass assessment of the American lobster (Homarus americanus) stocks present in the baie de Sept-Îles to determine whether they could support a commercial fishery.

Between May and July 2013, field outings carried out in close partnership with Pêcheries Uapan and Fisheries and Oceans Canada were held in Zone 18D (baie de Sept-Îles), between the Brochu and Bouleau rivers. AMIK’s biologists were on-board to perform sampling and their results are available upon request.